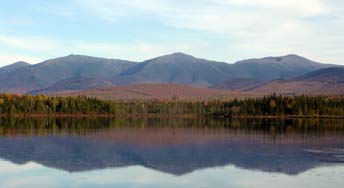 Named for Thomas Jefferson, the town of Jefferson was granted in the late 1700s. Like many communities in the White Mountains, Jefferson had become a popular summer resort by the turn of the 20th Century, complete with its own grand hotel, the Waumbek. Although the Waumbek was destroyed by fire in 1928, some of the hotel's adjacent cottages survive today and were named to the National Register of Historic Places in 2006.

The nearby Waumbek Country Club, built in 1895, is the oldest 18-hole golf course in New Hampshire and is open to the public.

With parts of Jefferson included in the White Mountain National Forest and the Pondicherry Wildlife Refuge (owned and managed by New Hampshire Audubon, the U.S. Fish and Wildlife Service, and the New Hampshire Department of Fish and Game), the area's natural beauty and outdoor opportunities are unmatched. Activities range from hiking and fishing to cross-country skiing, snowmobiling, and sled-dog rides. There are several hotels and inns in town, along with myriad camping options.

Two venerable New England amusement parks, Santa's Village and Six Gun City, cater to the whims and imaginations of children and the young at heart. Both are open through the summer and into fall, with Santa's Village staying open weekends through Christmas so that the jolly old elf himself can visit with kids.

With incredible mountain scenery, entertainment for all ages, and unlimited outdoor adventures to be had, Jefferson is a beautiful place to be any time of year.